IC Sports Therapies can now confirm that Nicki Cooke is going to Adelaide for the 2019 Australian Indoor Cricket Masters Championships, as Team Therapist for the New Zealand Central and Northern Masters teams. She will be away for the period of the 24th May to the 2nd June.

Action Indoor Sports Salisbury (SA) in Adelaide will be hosting the 2019 Australian Masters Championships, which will take place from 25 May – 1 June 2019.

Nicki will therefore not be available, should you have been wishing to schedule an appointment with her during the period of her absence.

If you would like to make a booking with Nicki, please Book Nicki Cooke online, or phone us on 9477-3103 so that we can arrange another time (starting in the first week of June) for you.

The South African Rhinos team has unanimously decided to give <team mascot> Sydney to Nicki Cooke in appreciation of her support and service to the team and her passionate desire to make a difference to the rhino species.

We know that you will cherish and nurture her… thank you again.
— Roger Moult and the RHINOS

Pakistan Veterans cricket team will be participating in the inaugural Over-50s Cricket World Cup to be held in Sydney from Nov 21-Dec 5. This was disclosed by Fawad Ijaz Khan, Chairman Pakistan Veterans Cricket Association here on Thursday.

Eight countries are participating in the Veterans World Cup including Pakistan, Australia, New Zealand, England, South Africa, Sir Lanka, Canada and Wales. Each team will play seven matches on single league basis and top four will move to semifinals with the final set for Dec 5.

The Pakistan Veterans Over 50s team was finalized in a PVCA board of directors meeting simultaneously held on Wednesday in Karachi and Lahore through a video conference. Former Test player Ejaz Ahmed, who played 38 Tests and 32 ODIs for the country, has been named as captain of the team while former ODI Player Ghulam Ali will be the vice captain.

It will be a serious, competitive tournament involving teams from most of the Testplaying nations. This will be a great opportunity for the world’s best over 50’s cricketers to showcase their talents and compete for national glory!

The tournament will be held over a two-week period on some great Sydney grounds and will involve a round-robin system where each country plays each other, culminating in semi-finals and a grand finale.

England has named its touring party for the 2018 Over-50s Cricket World Cup in Sydney. It is a full group, including two managers, two umpires and a doctor. The playing squad itself is a formidable one, featuring many of the top players from the very strong over-50s county circuit in England.

Over-50s Cricket World Cup England Over-50s has a Twitter account. It is: https://twitter.com/CountiesEngland?lang=en. They can be reached at @countiesengland.

New Zealand has named its 2018 Over-50s Cricket World Cup squad. With nine former first-class players and a number of senior club cricketers, this will be a team to watch.

The 16-man squad to compete in the Over-50s World Cup is as follows:

The pool of nominees was very strong and several good players have missed out.

The Canadian squad for the 2018 Over-50s Cricket World Cup in Sydney looks like a very good team, featuring at least 5 players with first-class and/or List-A experience.

Among these are Rohan Jayasekera, who played Test cricket for Sri Lanka; Brian Rajadurai, whose leg-breaks took almost 100 first-class and List-A wickets at an average of 25; and Farooq Kirmani, who has coached Canada and played first-class cricket in Pakistan.

Canada’s first match is against the hosts, Australia, at Drummoyne Oval on November 21.

Congratulations to all the players, and to Asad Khan and the Canadian Seniors Cricket Association for assembling the side – good luck for the tournament! 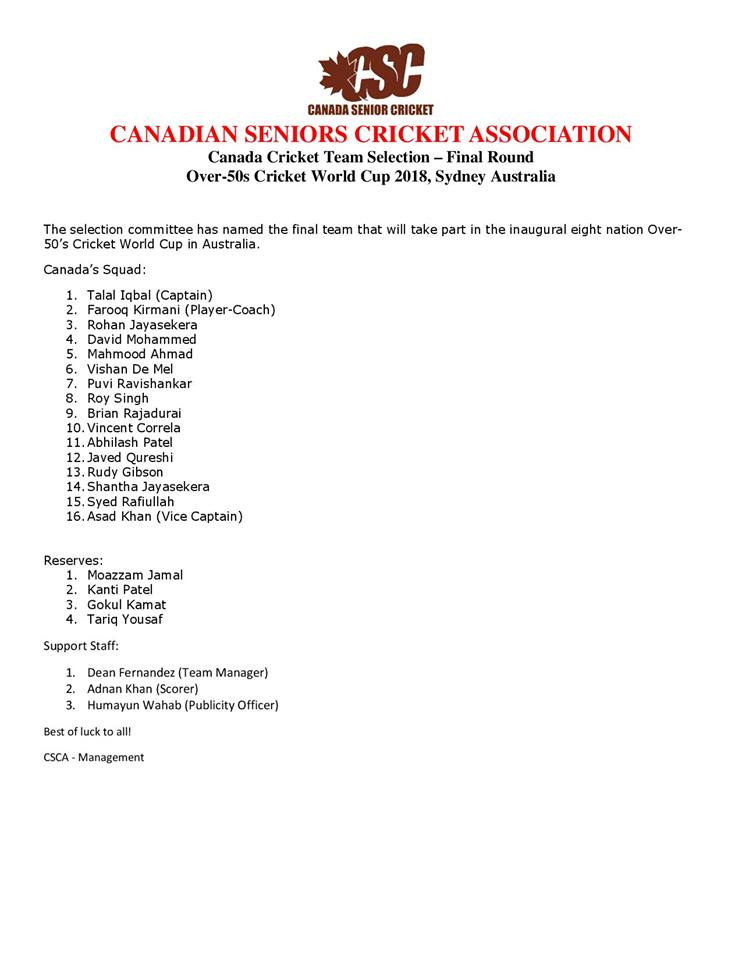 Sri Lanka has announced its squad for the Over-50s World Cup. The side will be led by former Sri Lankan international Marlon von Hagt and contains a number of fit and experienced cricketers who will be familiar with local conditions.

The full squad is:

“On behalf of our Australian National O50s Selectors & Australian O50s Committee, we announce the 16 man Squad and 4 Reserves for the 2018 Over-50s Cricket World Cup in Sydney with the first match commencing on Wednesday 21 November.

The squad selected is:

Michael Van Zuyden from Victoria is appointed the Manager of the Squad.

Congratulations to all and our best wishes for what we expect to be 2 weeks of exciting competition.

Like to know a little more about the NSW lads playing for the side? Check out this news article at Veteran Cricket NSW: Meet Our Over 50s Nationals

I’ve had multiple massages with Lisa and thoroughly recommend it!

I’m a soccer player, I train regularly and work on my fitness in other areas. So seeing Lisa not only keeps my body feeling great, but has also allowed me to maintain a healthy functioning body, so that I can continue to play sport.

Had a massage from Nicki after many (too many…) years of not seeing her and it was A.M.A.Z.I.N.G! So glad I get to be the first to comment on this great business’ Facebook page. Professional, but relaxed, atmosphere to the place – definitely a place of caring and healing…

Check out Nicki and her team for amazing results

Been to at least a handle full of physio’s Chiropractors and other specialists in my 6 years of training Brazilian Jiu-jitsu. I have found that for my long term recovery as well as prevention and understanding of what is actually nessasry for a healthy athlete to Excel in his or END_OF_DOCUMENT_TOKEN_TO_BE_REPLACED

I have been doing a Mums and Bubs Pilates class with Colin and it is great! We have fun and exercise at the same time, something I would never have believed possible until I started this class. My almost 3 year old plays happily while my almost 1 year old END_OF_DOCUMENT_TOKEN_TO_BE_REPLACED

I have been to IC 3 times. Can highly recommend it.